I am a little off on posting daily like I had planned, but unfortunately between the boyfriend and I, one or the other, and most recently both have been sick the past week.  Now, we both are getting over it.  Ugh…  I have finally gathered up enough energy to put together this quick post though!

Instead of going back every day and posting all we ate, I will just do a few quick reviews since I did not have the energy to make all of the food, let alone take the photos of everything.

The yummiest thing I made this week was the island pork tenderloin!  Major yums!!

To make the rub, I started with some salt, pepper, cinnamon, cumin and chile powder.

Next, I gave both sides a nice coating of the rub.

Once you add the rub, you want to brown both sides of the tenderloin in a small bit of oil.

Once the meat was a golden brown, I mixed up some brown sugar, fresh garlic and Tabasco.  Top the meat with this mixture and then pop it into the oven!

Ready to go in for 20 minutes!

Fresh out of the oven!  I honestly wish I could capture the smell of this for you all to experience!!!  OMG!  I wana make it every night just so my house will  smell like it!!  Usually the sugar caramelizes, but we currently have a gas stove so that didn’t quite happen this time.  LOL

Next in line is the asparagus soup!!!  Wasn’t too sure about this at first, but it is quite good!!!

Starting off by doing a quick saute of onions and garlic.

After that I added the potato, asparagus and chicken broth to the mix.  I cooked it until it was all tender then threw it into a blender!

Before putting it into the blender I added some salt, yellow mustard seed, dry mustard and a small mix of various other spices.

While we are on soup, next is the butternut squash soup!!  I adore this one!!

Once again we start with some onion and garlic!

While that is cooking away I peeled, cut, cleaned out and cubed the butternut squash.

After the squash is ready I toss it into the pan and add some chicken broth.  Cook it until tender and then pop it into the blender as well.

Here it is!  I know some people say to get a food processor to make these soups, but I did not have one problem with my blender.  I was amazed how smooth it came out.

Next, shrimp stir fry!!!  This stuff is soooooooo good!  I could eat it ever night!  In fact, I made it several nights in a row since it was something quick and easy to make while we were sick.  Took maybe 10 minutes total since I had all of the food chopped up and ready to go at the beginning of the week.  Major time saver!

I sauteed some garlic and ginger in some soy sauce, rice vinegar and some chicken broth.  The smell from this alone made me hungry!

After a few minutes I tossed in some broccoli, chestnuts, mushrooms and some snow peas.

Once the veggies were almost cooked I put in the shrimp and let it all simmer in some extra chicken broth.

Did I mention how awesome this stuff was????  After cooking it all I topped it off with some sesame seeds and cashews!  Yummo!!!  BTW, if you plan on trying to tackle the whole 10 ounces that the diet suggests for the Level 3s, good luck!  I didn’t even make it half way through!!!!

I know you saw the previous post with the huge omelette, so here is the second one!  This one however is a chicken omelette!

I cut this one down to 6 eggs instead of the 10 from the previous one.  Still a lot of food!  On this one we added some chicken and parmesan cheese.

We topped it off with some fresh basil and ate it with a side of turkey bacon.  My fave breakfast by far!

The chicken salad was one of the first things I made.  Good, but not a fave for me.  There just seemed to be too much mayo compared to the chicken.  Hoping to remake it with 1/2 the mayo next time around. 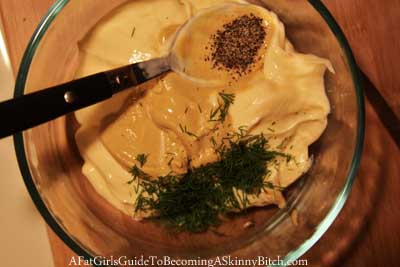 Here I mixed up some low fat mayo, dijon-mustard, pepper and dill.

Once everything has all been combined we added some green onions.  Then came the celery and chicken. 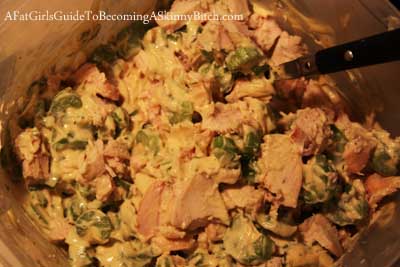 Welp, that is it for now!  Planning on doing my best to post daily this week since the cold is mostly kicked!  Keep checking back for more!

This entry was posted in Getting Started, P90X, Recipes and tagged diet, eating, P90X. Bookmark the permalink.